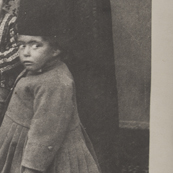 Firuz Mirza Nusrat al-Dawlah Farmanfarma, the son of Fatimah Khanum ʻIzzat al-Dawlah and ʻAbd al-Husayn Mirza Farmanfarma, was born in 1889. He first married his cousin, Aminah Daftar al-Muluk, and they had a son named Muzaffar. The marriage ended in divorce in 1908. Firuz Mirza was killed in 1937.