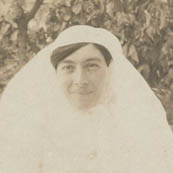 Aminah Daftar al-Muluk (Daftari) was the daughter of Malik Taj Najm al-Saltanah and Mirza Hidayat Allah Vazir Daftar Ashtiyani. When she was eight years old, her father died and her uncle, Mustawfi al-Mamalik, took the guardianship of both Aminah and her brother, Muhammad Musaddiq. At an early age, she was engaged to Firuz Mirza Nusrat al-Dawlah (her cousin) and finally married him. They had a son together who was named Muzaffar. The marriage, however, did not last and in 1908 they got separated. After the divorce, Aminah married 'Azud al-Sultan, one of Muzaffar al-Din Shah's sons and maternal uncle of Nusrat al-Dawlah.