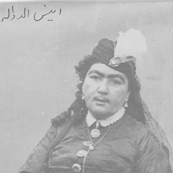 Fatimah Sultan was the daughter of Nur Muhammad, a peasant from Amamah. After her father’s death and her mother’s remarriage, she moved to Dulab village outside Tehran. She began working as a maid for Jayran Khanum Furugh al-Saltanah, the favorite wife of Nasir al-Din Shah. Following Jayran's death, a few months after Fatimah Sultan's marriage with Nasir al-Din Shah, she became his favorite and was given the title of Anis al-Dawlah. She was the only wife who spoke her mind openly and criticized the ruler publicly. She accompanied Nasir al-Din Shah regularly on his travels within the country. During his 1873 trip to Europe, she was sent back from Moscow after it became apparent that the presence of veiled women in the entourage would create problems of protocol for the host governments. Her disappointment is revealed by the grudge she held against Mirza Husayn Khan Mushir-al-Dawlah, the Prime Minister, whom she held responsible for her interrupted journey. She received the wives of heads of foreign legations and visiting dignitaries and assumed the ceremonial duties performed by Mahd-i ‘Ulya after the latter’s death. Close