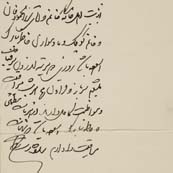 Letter from Abu al-Qasim Burhan al-Dawlah to his brother Riza Quli Khan Sardar Mukarram (Nizam al-Saltanah), governor of ‘Arabistan and Luristan. He writes about the rumors of arrival of Salar al-Dawlah with his troops, insecurity in the region, the upheavals in Azarbayjan, and reassures him of the security of the household.