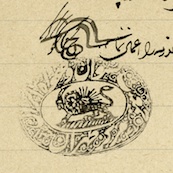 Letters from Society of Patriotic Women of Iran to Sadiqah Dawlatabadi

[Society of Patriotic Women of Iran to Sadiqah Dawlatabadi, 20 January 1924]

My esteemed, honorable and noble sister!

After sounding my inclination to seek information on the health condition of that respectful and noble [sister], and also extending my sincere sense of deference, I would beg to bother you: It is about a year since you have departed. So far, you have not expressed a word, although, as your sisters, we have been expecting to get informed to a certain extent about your situation, observations, and exigencies. However, whenever possible, I have made inquiries from Mr. Dawlatabadi about your health condition and have been delighted once I received glad tidings on your wellbeing.

The reason for the delay in sending the letter of accreditation has been the lack of information on where you were staying, until a while ago when [I] asked His Excellency Mr. Haji Mirza Sayyid Yahya[1] and he provided the address and thus the letter of accreditation was submitted by post on 7 Jadi [Capricorn] 1302. Since the courier who took the envelope to the post office had not registered it, the uncertainty grew about its arrival, hence it became necessary to disturb you with this epistle, explain the case, refresh sincerity, rewrite the similar letter of accreditation and submit it as enclosure. Obviously, considering your humanist, patriotic emotions and your concern, actions better than what we expected would be taken.

In conclusion, the best of my wholehearted feelings and sincere prayers are submitted and I look forward to your informing me about your situation at your earliest convenience via the first post.

[2]At the time of the writing of this letter, presidency of Society of Patriotic Women had recently passed from Muhtaram Iskandari (1895-1924) to Masturah Afshar (1880-1945), who could have been the letter’s author.