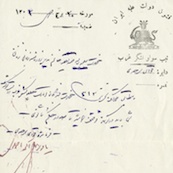 Correspondence of Sadiqah Dawlatabadi regarding her attempt to cross the border

Several telegrams about the border crossing of Sadiqah Dawlatabadi en route to Europe, and a letter in which she protests her and her physician’s detention by the army while attempting to cross the border en route to France for medical treatment.

To the Honorable Military Governor of Qasr, may his fortune last

Upon arrival I presented to you a note through Mr. Nasir Khan and an envelope through a military personnel containing a brief account of my affair here—of course you are aware that I was confined today from two o’clock until six-thirty at Qasr—and now that I am no longer in confinement it is necessary to give you a detailed account of the affair and report events from Karand to here, and I shall also send a copy of this report to the Honorable Minister of War and other authorities:

First, it is almost six years during which I have been afflicted with a kidney problem. A month ago this problem became so acute that all the doctors in Tehran concurred that the only remedy was an operation and they also saw danger in operating in Tehran. During the Nawruz holidays, following the doctors’ advice, I set upon a journey. Since my brothers could not arrange things so quickly as to accompany me on this trip, Dr. Roland, whom our family has known for a few years and was our family doctor as well, and familiar with my health condition, agreed to accompany me. Because I was occasionally gripped with severe pain and I was forced to take injections and other treatments, they saw it beneficial for me to travel with him. The government expedited the issuing of my travel documents and I am currently heading for Europe under document No. 316 with Dr. Roland. Our journey started in utmost security and openness until the night before Tuesday, 20 Hamal, when we arrived, close to sunset, at Karand. I was under the blanket in a room when Major ‘Ali Akbar Khan opened the door and entered the room with haste, which startled me tremendously. Just an hour before, the Deputy had come and asked my name and position, checked my papers, and left and I didn’t see it probable that any other problem may arise. I asked him why he entered with such impetuousness and who in fact he was. “My name is ‘Ali Akbar Khan Ahmadi,” he said, “Who are you?” I said my name and mentioned that I had shown all my papers, from travel document to the Foreign Ministry permit and doctors’ letters, to his deputy. I added that I was ill and going for treatment. He made a mocking gesture, said that my explanations weren’t acceptable and asked for my travel documents. I thought the gentleman could read and handed him the travel document and other papers, and he in turn handed them to someone else to read. Then he said that these did not concern him the least and that what he was interested was a permit from the Minister of War. I said that I didn’t have any because my travel documents were valid and bore the seal of the Foreign Ministry, and because of that I never set out to obtain permits from the Minister of War. He said that he didn’t recognize these documents and that he would confiscate them. In astonishment, I asked why he thought he could do that. He said that he would just show me. I said, “Alright, then give me a letter stating that my travel document and other papers are with you.” He said that he wouldn’t give me such a receipt and that I was confined. The car and the doctor were also confiscated. Major left with my travel documents and letters. The doctor followed him. They had informed Major General the deputy governor, and he had come and taken my documents after much trouble and returned them to me.

I spent the night in a room with two soldiers standing guard. In the morning, I was accompanied by a soldier to relieve myself and then escorted back to the room. At noon on that day, in reply to Major’s dispatch, the Western Army Commander instructed that the doctor and the car were free to go but that Sadiqah should stay until further inquires. Of course this telegram and the order of my confinement pleased the juvenile imagination of Major…. But the doctor refused to leave because he was duty bound and because the Foreign Ministry had specifically written on my travel document, signed by the French Embassy, that I was to be accompanied by the doctor. But they let the car go, as its other passengers were a Russian woman and the servant of the Italian Ambassador who had come to return the car.

I was under military confinement until noon on Tuesday but the doctor was free. In the afternoon, the military guards were withdrawn but I was still confined. On Tuesday evening I sent a telegram to Mr. Haj Mirza Ali Muhammad Dawlatabadi[1], my brother, asking him to obtain a letter from the Minister of War and send it our way. At two in the afternoon on Thursday, my brother’s telegram, which you will find attached in this envelope, arrived. Major who still didn’t want me to leave, took the telegram along with Major Husayn Khan and Major General, the head of telegraph office, to a room and whispered to each other for a while. Major Husayn Khan said to Major General that he wanted to take another course. Then they came to us and said that the telegram was not enough but that it was possible to transfer me to Qasr with a guard on the next morning, and had me stay there until the telegram of Army Commander arrived. I asked them for a letter so that the authorities along the way would not disturb us. They issued the letter after much insistence. They also wrote a letter to Sultan Asad Allah Khan, asking him to keep me in Qasr for the telegram to arrive. I was also present to the writing of another letter to Sultan Asad Allah Khan strictly forbidding him to inform the Governor of Qasr of my arrival and confinement in the Military Government of Qasr. I asked the reason? They said: “Because we don’t want him to take matters into his own hands by contacting the central office directly and to bother you any further. It is enough that we have hassled you this much already.” I well realized that this individual had foul intentions despite the appearance of good will.

When we were ready for departure, they again delayed me for a while, and once we reached the customs bureau, corporal Quli Khan showed a letter from Nasir Khan that I had to sit in a car with another military man. The driver was very difficult. I was forced to ask him what he wanted. “Give me five tumans to accept the military man,” he said. Because I was determined to end this halfway affair and because I wanted to be saved from a band of twenty Kurdish travelers who ridiculed me and I heard the chant of “guilty, guilty” reverberate, I paid the money and we got on our way. When we entered Qasr, I realized that it was even worst there, and I suddenly saw myself surrounded. By then, since I realized that you are the head of the government of Qasr, I wrote the note and handed it to the doctor to give it to you. A few minutes passed. I had to submit to the command of a military man with utmost reluctance who wanted to take my belongings to a barrack. I asked the doctor and he said that it was confiscated. This added to my consternation. Finally, in utmost weakness and illness I got out of the car. Approximately twenty soldiers were surrounding me and led me through a passage with a crowd behind me in the garb of interrogators, and I would hear foul words repeatedly that they would mouth in response to people’s inquiries. Needless to say that I can’t repeat those words here.

In any case, they took me to the barrack in the most offensive manner. I saw the doctor confined there as well. I was in great pain. The doctor became livid with anger and demanded of Sultan Ahmad Khan that they either release him or write that he was also taken into custody. They did neither. Apparently, though, Sultan and Nasir Khan never abandoned politeness with him. But when I asked them to deliver my letter to you, they said that they couldn’t do that. Finally, my health so deteriorated that I was about to die, until around sunset when the telegram of our release arrived. They brought me to Sultan’s house from there and I am writing this letter from his house. The financial damages incurred to me are as follows [2]:

And of course there are physical and moral damages that cannot be compensated until the perpetrators of this action can be tried in a court and that has to do with the central government. But what I request from you, who is the highest authority of one of the borders of Iran, is to offer formal comfort to a respectable French person who was the consulate of France in Isfahan as well as a medical instructor in Tehran and suffered so much helping an Iranian, if only that he wouldn’t lodge a complaint to authorities concerning this shameful treatment, at least until I make reparations of my own.

[verso of last page:] I beg of you to keep this account confidential until action is taken from Tehran. In other words, keep the content of this letter from newspapers or other publications, but you can communicate your findings to proper authorities as you see fit.

[2]The accounts in the original are written in siaq.