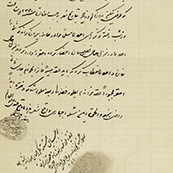 The writer answers a question from Sadr al-Muhaqqiq regarding the marriage contract of the daughter of Fazl‘ali Khan and Ahmad Aqa, the brother of Isma‘il Aqa. He recounts a night in the month of Rajab in 1922 when Ahmad Aqa’s servants took him to Fazl‘ali Khan’s house and coerced him to perform the marriage vow despite the dissent of Fazl‘ali Khan’s daughter. The note on the margin states that if the girl later shows discontent the marriage is void.