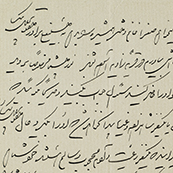 Letter from Muntasir Lashkar to ‘Amid Lashkar

Muntasir Lashkar to ‘Amid Lashkar [Mirza Abu Turab]; inquires about Mirza Mahmud Khan, Mirza Ahmad Khan, and Mirza Muhammad Khan, expresses concern that ‘Amid Lashkar may not be checking on them regularly and urges him to see them every day and look after their education; discusses sending money and letters via the colonel’s attendant and being preoccupied in Chahar Uymaq and with inspection of the villages; asks ‘Amid Lashkar to write about the family, requests some tobacco, paper, and envelopes; mentions that he has found a good husband (Hazratquli Bayg’s brother, named Husayn‘ali) for Sughra Khanum, his sister’s daughter and that if this marriage happens, he could bring the mother and daughter to Zaviyah village; asks ‘Amid Lashkar to persuade them, to be direct and tell them they cannot wait for a Shahzadah or Amir Tuman to show up, that the person he has in mind is a decent peasant, and that such people are wary of them and will be respectful, but if they find someone in Tabriz there would be a lot of trouble and it would be costly. He then addresses Mirza Mahmud Khan, Mirza Ahmad Khan, and Mirza Muhammad Khan, asking them to write to him in their own handwriting and promises to send money for their new year clothes, if he returns from Chahar Uymaq early enough. At the end, he sends his greetings to the sisters.