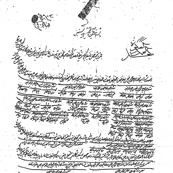 Dividing the inheritance of Shah Rustam Bayg. The document lists Shah Rustam Bayg’s inheritors, their descendents, and their inheritors. The inheritance consists of some properties in ‘Ishrat Abad, Qulhak, Shimiran that are being divided in the presence of some of the inheritors, some of whom also represent the absentees. According to this document, for up to fifty years after the agreement, the claims of whoever makes a claim against someone else will be voided and they will need to pay five hundred tumans to the others.