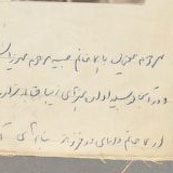 The text reads as follows: [p.126] “ʻAli Khan married Huma Khanum, the daughter of Mirza Saʻid Khan, Minister of Foreign Affairs. Their marriage contract was with my mother and I brought it to Isfahan in 1959, had it repaired by the Department of Fine Arts and decorated it with a magnificent inlaid frame. The marriage contract is now in the possession Khanum Khiratin, a grandchild of Asiyah Khanum (known as Ihtiram al-Shariʻah), daughter of ʻAli Khan Vali. ʻAli Khan had two children with Huma Khanum, called Asiyah and Qasim Khan. Asiyah later married Sultan al-ʻUlama of Tehran, a prominent cleric, and was given the title of Ihtiram al-Shariʻah. Qasim Khan was accompanied by [p. 127] his guardian Sahib Nasaq when he left Iran for Paris in 1889. In either his first trip to Ardabil (likely without his wife), or later in 1894 (when he was again appointed to the governance of Ardabil), ʻAli Khan married Tuba Khanum (from the Amiri family). I, the one who is writing this note, was commander of Ardabil’s brigade between 1950-1952 and came to know Amir al-Saltanah, one of Ardabil’s prominent figures. When he found out that I was ʻAli Khan’s grandchild, he explained that Tuba Khanum (ʻAli Khan’s wife) was his aunt (Tuba Khanum’s seal that was engraved on a small agate is with me). [p. 128] ʻAli Khan had three children with Tuba Khanum called Haydar Quli, Mahdi Quli, and Maryam. Mahdi Quli and Maryam died in their infancy. However, like his brother, Qasim Khan, Haydar Quli, was sent to study in Paris and Sahib Nasaq accompanied him. Unfortunately, Haydar Quli also died in his youth. He drowned in the Seine and my father received the news in Tehran. I was a child then and remember that my father, who was the chief of Police in Tehran, was deeply mournful, and held a splendid wake for three days for men and women. The men gathered in Biruni courtyard and women were in Andaruni. The wake was from morning to sunset and lunch was also served for guests.