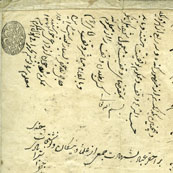 Endowment of properties (in the villages of Mansur Kandah and Kalak, and Istardikala) by Mirza Mahdi [father of ‘Abbas Quli Khan Ashrafi], son of Mirza Muhammad Yusuf Ashrafi Mustawfi to create income for the poor, including: part of the original manuscript of the endowment for his mother dated January 23, 1838; confirmation of Mirza Mahdi’s endowments on behalf of his parents by Muhammad Ibn Muhammad Mahdi dated June [or July] 1855 ; and a confirmation document by the endowment management of Sari, dated March 1, 1917;