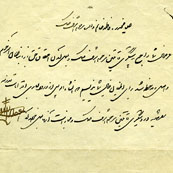 Two letters and a telegraph: a letter by I‘tizad al-Mulk responding to Fatimah Khanum’s request and promising to pursue the matter of her son’s (Ashraf al-Mulk’s) murder upon his arrival to Sari, dated December 19, 1918; a telegraph from Tehran to Sari from Ministry of Interior, pursuant of a petition by Fatimah Khanum protesting lack of action to pursue Amir Nusrat and other murderers of Ashraf al-Mulk and asking for protection of his properties against their transgressions, dated February 4,1919; copy of a note from I‘tizad al-Saltanah to governor of Ashraf (Bihshahr) in regards to the interference with the properties of Ashraf al-Mulk, dated February 12, 1919.