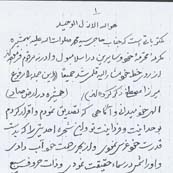 Letters and other writings of Haji Sayyid Muhammad Isfahani

Booklet consists of several letters and writings of Haji Sayyid Muhammad [of Isfahan], in Istanbul and Edirne, originally copied by Mirza Mustafa Katib [the Scribe], bearing the completion date of January 1921. The present text was copied by F. Azali and was completed on April 5, 1987, with a copy of another 1852 text, completed on April 9, 1987. Among the addressees of Haji Sayyid Muhammad’s letters are: his sister (not named), Qanitah (Subh-i Azal’s wife), Aqa Nur al-Nur, Aqa Sayyid Hashim. Two are addressed to “my dear friend.”