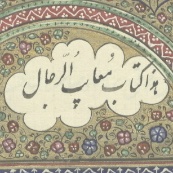 Ma‘ayib al-rijal [Vices of Men], written by Bibi Khanum Astarabadi (1858 or 59-1921) in 1894, first published in 1992. Vices of Men was Bibi Khanum’s response to Ta’dib al-niswan [Disciplining Women], also known as Ta’dib al-nisa’, a male-centered, often misogynous text in the tradition of satirical books of advice to men about how to treat their wives and train their daughters. This text begins autobiographically with Bibi Khanum explaining her social and educational background. The text is composed of two sections; the first is a direct wittily angry response to Disciplining Women. The second part is addressed to other women (“my sisters,” as she calls them) and is her advice and warnings about men, in particular as husbands.