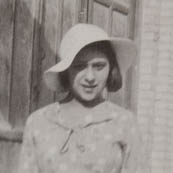 Ebbi Hambarsoumian Haroutunian, daughter of Astiqyak and Sarkies, was born on February 6, 1915 in Yerevan, Armenia and later fled to live with her family in Iran. Ebbi's parents married in 1914 in Yerevan. Ebbi had two sisters, Seda and Lorik (Lulu). Ebbi died in February 1994 of Pancreatic cancer.

Ebbi Hambarsoumian Haroutunian was born on February 6, 1915 in Yerevan, Armenia, whic was then within the territory of the Russian Empire. Her father, Sarkies, was born to a landed family in Khuy. He graduated from Jamaran school in Armenia and became a teacher of Armenian language and literature. Ebbi's mother, Astiqyak, was an affluent, Russian-speaking Armenian in Yerevan. Ebbi's parents were married in 1914 in Yerevan. After the Russian Revolution of 1917, and the abolition of the Republic of Armenia by the Red Army, Sarkies fled to Iran due to his activities in the anti-Bolshevik ""Dashnak"" party. Astiqyak left Armenia as well, and fled to Iran via Aras river; she did not take Ebbi with her because of the river's dangerous conditions. Later on Ebbi, was sent by train, but due to political conditions, the train had to stop several times; it finally reached Tabriz after several days' delay. The person who was supposed to pick Ebbi up at the train station and take her to her family asked about the little girl and mentioned her father's sobriquet, ""Dayi."" Ebbi threw herself into that person's arms and did not leave that person until she finally met her family. Ebbi finished high school in the Armenian Gymnasia school, which was run by Russian and Armenian principals along lines similar to European schools. In this school, subjects were taught in Russian, French, and Armenian. Seda, Ebbi's sister, was born in Tabriz. After a while, the Haroutunians left Tabriz for Isfahan because of the activities of the Russian secret police, where Ebbi was hired by the Singer company. She learned sewing and helped her family financially. Ebbi's third sister was born at that time and was named Lorik, nick-named Lulu. Riza Shah ordered that Armenian schools be closed in 1936. Hence, Ebbi's father, who used to teach in Armenian schools, became unemployed. On the recommendation of the Dashnak Party, the Haroutunians left Isfahan and resided in Tehran because of the special situation before the second World War. In Tehran, Ebbi became the family's major bread winner. After the second World War, Ebbi opened a store on Nadiri Street (now Jumhuri Islami Street) called Bebe (Baby in French), in which handmade clothes for children were offered. Despite the popularity of the store, it did not last long and was closed. Ebbi continued her work with the Singer sewing machine company, though later she became allergic to fabric fibers and had to leave her job. Her sister, Seda, who was a clerk, had married years earlier and had two sons. Her younger sister, Lulu, who, like Ebbi, had not married, became the family's bread winner. Ebbi died in February 1994 of Pancreatic cancer. [This biography is based on information provided by family members.] Close

This biography is based on information provided by family members. Close