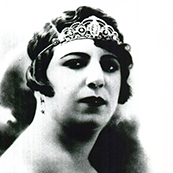 Qamar al-Muluk Sayyid Husayn Khan (Vazirzadah), daughter of Tuba Khanum and Sayyid Husayn Khan and granddaughter of Khayr al-Nisa’ (Iftikhar al-Zakirin), was born circa 1905 in Takistan (Qazvin). She was revered for her mastery of the repertoire of Persian vocal music (radif-i avaz). At the age of fifteen, she married an official, but the marriage ended after one month. When she was thirty years old, she married Amin al-Tujjar, but this marriage did not last more than a year either. She died on August 6, 1959, in Shimiran and was buried at Zahir al-Dawlah cemetery.

"Her father, Sayyid Husayn Khan, died before Qamar was born. She subsequently lost her mother when she was around a year old and grew up in the care of her maternal grandmother, Mulla Khayr al-Nisa’ (titled as Iftikhar al-Zakirin). Khayr al-Nisa’ was a rawzah-khvan (preacher) at the religious gatherings of the women’s enclosed quarters (harem) at the court of Nasir al-Din Shah. At age seven, Qamar began accompanying her grandmother to her religious recitals and Khayr al-Nisa’ encouraged her to perform along with her. Qamar attended various elementary schools (maktab) and then Namus School for girls in Sangelaj. Qamar continued studying music with well-known musicians of the time who frequented the festive musical gatherings held at the house of a relative and patron of music Majd al-Sanayi‘. Murtaza Naydavud taught her the tonal techniques and modal refinements of the traditional Persian vocal repertoire. Qamar changed her last name from Sayyid Husayn Khan to Vazirzadah, in honor of the musician and theoretician of music ‘Ali Naqi Vaziri. Qamar’s first formal performance as a vocalist took place at Tehran’s Grand Hotel in 1924. Qamar was also respected for her progressive social and political tendencies and legendary compassion for the poor and the powerless and her generosity to them. She was the first Persian vocalist to perform in public without the socially and religiously sanctioned dress code for women, the first recording artist, and the first female vocalist to sing and record highly charged political songs such as Abu al-Qasim ‘Arif’s Constitutional Revolution song Mars-i jumhuri. " Close