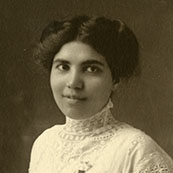 Qudsiyah Ashraf (or Qudsiyah Maryam Ashraf), daughter of Safiyah Munavvar Khanum and Mirza Fazl-Allah (son of Mulla Ashraf from Kan), was born in Majidabad, northeast of Tehran, on 22 November 1889. She was one of the first Iranian women to pursue higher education, and obtained university degrees in the West. She was a Baha’i philanthropist, and an initiator and organizer of numerous educational and health projects, mainly for women and children. Qudsiyah Ashraf died at the age of 86, on 16 April 1976 in Tehran, after a brief illness, and was burried at Gulistan-i Javid, the Baha’i cemetery in Tehran.

During the early years of her life, Qudsiyah Ashraf studied Persian and Arabic with Mirza Baji Khanum and Mirza Yusuf Khan Vijdani. Later she studied English for three years at the American School for Girls in Tehran. In 1911, accompanied by friends of the family, including Lutf Allah Hakim, she traveled to the US. In 1912, she was asked by ‘Abd-al-Baha’ to represent the women of the East at the cornerstone-laying ceremony of the Baha’i temple (Mashriq al-Adhkar) in Wilmette, Illinois. Qudsiyah Ashraf obtained a bachelor degree in 1917 from Boston University. She also earned a First Aid Certificate from the American National Red Cross in Boston. In 1918, she received an M.A. degree from Teachers College, Columbia University. In 1919, Qudsiyah Ashraf returned to Iran. She focused on developing programs for the education and advancement of women, and was a founding member of Lajnah-yi Taraqqi-i Nisvan (Women’s Society for Progress). After Lillian Kappes, the principal of Tarbiyat girls school passed away, Qudsiyah Ashraf became the principal. At the age of 38, Qudsiyah Ashraf traveled to Beirut and in 1930 obtained a degree from the School of Nursing, and in 1931 a certificate in Midwifery for Graduate Nurses at the American University of Beirut. Subsequently, she opened a medical office in Nablus, mainly dedicated to the poorest patients. She was appointed Official Representative of the Women of Persia at the Congress of the Women of the East in 1930 in Damascus. Upon returning to Iran, Qudsiyah Ashraf was employed by the Anglo-Iranian Oil Company in Abadan and was appointed director of the Program for the Education and Welfare of Workers and their Families in 1946. Qudsiyah Ashraf was a member of the Council of Culture of Abadan, co-founder and member of the Board of Directors of the Society of Arts and Letters of Abadan, and member of the Board of Supervision of the Institution for the Protection of Indigent Children. After retiring from the Oil Company in 1949, she took up residence in Hasirabad, one of the poorest quarters of Abadan, and set up a private practice and a small clinic. By the end of 1956, she joined the Baha’i Ten Year Plan for South America. She returned to Iran in 1963 and settled down in Khushah in the plains of Gurgan, where she established a small clinic, a library, and an elementary school, and launched regular classes for women. At the age of 85, Qudsiyah Ashraf traveled to the village of Takur, located in the Nur district of the Province of Mazandaran, and for two years participated in a project initiated by Misaqiyah Hospital for the creation of a medical clinic in Takur. Close

Help us complete this profile
Collections