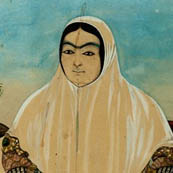 Shah Baygum known as Ziyaʼ al-Saltanah, was daughter of Maryam Khanum and Fath ‘Ali Shah Qajar (his seventh daughter). She was born in 1799 and died in 1873. Her husband was Haj Mirza Masʻud Ansari and Shahzadah Baygum Masʻud Ansari was one of her daughters.

Shah Baygum (1799-1873), known as Ziya’ al-Saltanah, was the daughter of Maryam Khanum (Fath ‘Ali Shah’s thirty-ninth wife) and Fath ‘Ali Shah Qajar (1798-1834). She was his seventh daughter. Fath ‘Ali Shah paid particular attention to her education and gave her the title Ziya’ al-Saltanah, ‘light of the realm.’ She acted as her father’s personal secretary, or Munshi al-Mamalik-i Andarun, and all of the shah's private letters were written in her hand. She also controlled the signing and sealing of the royal decrees of the harem. She was intimately involved in the financial management of the harem and the distribution of money to younger princes, and worked closely with Gulbadan Baji Khanum, Khazin al-Dawlah and her assistants, Khayr al-Nisa’ Khanum, and Mirza Maryam, in monitoring withdrawals of gold and jewelry from the royal treasury. It was Ziya’ al-Saltanah who recited poems composed in praise of Fath ‘Ali Shah sent to the court by contemporary poets, and it was she who recorded many of her father’s poems in writing. Ziya’ al-Saltanah was a skilled painter, musician and embroiderer; she excelled in calligraphy. There are several Qur’ans in her hand-writing. One Qur’an is now kept in the Qum Holy Shrine Museum. Ziya’ al-Saltanah married the Minister of Foreign Affairs, Mirza Mas‘ud Ansari Garmrudi (1790-1848), in 1835. They had four children, two daughters and two sons. Mirza Hasan Khan Nayib al-Vuzara (1839-1906) and Mirza Husayn Khan Misbah al-Saltanah (b. 1843) were their sons and Shahanshah Baygum (Agha Jan) (ca. 1836-1917) and Shahzadah Baygum (1861-1924) were their daughters. She died in 1873 at the age of 75 and was buried in a room of the house she owned in Karbala’. Close