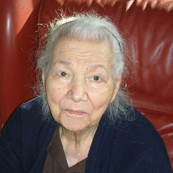 Badr al-Sadat Afqahi (Ghods), the daughter of Monir Tafreshi Nabavi and Sayyid ‘Abd Allah Afqahi, was born in 1920 or 1921. Her mother passed away when she was six months old, after which she stayed with her grandmother, Ashraf al-Hajiyah, and her wet nurse (Nanah) for two years before returning to live with her father. Badr al-Sadat married Tahir Quds in 1945 and they had six children: Muhammad (who died at the age of 8), Sa‘idah, Sudabah, Mahbobe, Mas‘udah, and Kazim. Tahir Quds died in 1971 at the age of 49.