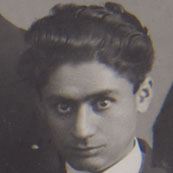 Sayyid Mujataba Buzurg ‘Alavi, a writer and novelist, was born on February 2, 1904 in Tehran. He was the son of Khadijah Qamar al-Sadat (granddaughter of Ayat Allah Tabatabayi) and Sayyid Abu al-Hasan ‘Alavi, the grandson of Haj Sayyid Muhammad Sarraf, and the brother of Shah Zanan ‘Alavi. Buzurg ‘Alavi married his first wife, Gita, in 1936. That marriage ended in divorce in 1939. Later, he married his cousin Fatima ‘Alavi and they had a son, Mani. In 1956, he married Gertrude Klapoetke in Germany. He died on February 16, 1997 in Berlin.