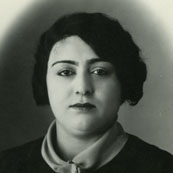 Rubabah Mohtadi, known as Afzal, was born on January 1st, 1905 in Tehran. She was nine years old when she married Mir Hadi Mehrooz and at the age of fifteen she gave birth to their first child, Mustafa. They had two other children afterwards, whose names were Mujtaba and Mahin. She changed her last name to Muʻarrab after marrying Mir Hadi Muʻarrab. Mir Hadi later changed his own last name to Mehrooz. Afzal Mohtadi, who was called ʻAziz Jun by her relatives, was literate and might have learned how to read and write from someone in the family, according to her family. She also knew how to knit and crochet, and learned sewing from a private tutor at home. Afzal Mohtadi died on June 14th, 1997.

This information was provided by the family. Close