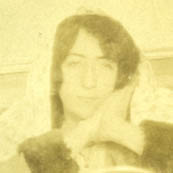 She completed her education under home tutors and wrote poems under the pen name of Jannat. At the age of thirteen, she married Mustafa Quli Khan Hajib al-Dawlah, who was an influential person in Nasir al-Din Shah's court and a man of culture. They socialized with poets and writers of the time, including Malik al-Shu‘ara Bahar, Shahzadah Muhammad Hashim Khan Afsar, Shams al-Shu‘ara Mulk Ara, Mirzadah ‘Ishghi, and Mirza ‘Ali Akbar Khan Shayda. Soon, Iran al-Dawlah got the attention of her contemporaries and her poems were published in some of the periodicals of the period such as Armaghan and Gul-i Zard. Her book of poetry "Bahar-i Jannat," gathered by one of her sons, Allahyar Davallu, was published in 1978 or 1979. Some of her other poems are also published in two books titled Karnamah-i Zanan-i Mashhur-i Iran (by Fakhri Qadimi) and Bahar-i Qajar (by Niku Yusufi). Some of her own handwritten poems exist in the Giti Ghajar Davallu Collection on our website. In addition, Fasl Bahar Khanum wrote a book on the craft of cooking and homemaking. She was also a student of Kamal al-Mulk and received her certificate from Hunaristan-i Sanayi‘-i Mustazrafah. She has left behind some oil paintings that are being kept by her children. The image of one of her paintings, a portrait of a woman, exists in the Hajib Nayyir ‘Uzma Qajar Davallu Collection on our website. Additionally, Fasl Bahar was a talented singer and played piano and tar and has left behind some records in Bayat-i Turk. She died in 1940 and according to her will was buried in the shrine of Hazrat-i Ma‘sumah in Qum. Close