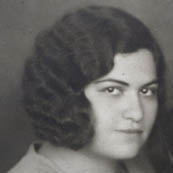 Anik Istipaniyan (Avkiyan), born in 1919, studied at Zhandark elementary and high school, and continued her education at the University of Tehran as the first woman who graduated in Dentistry from this university. Later she started her practice next to her father in Tehran and then married Avak Avakiyan in 1941. Anik and her mother, Ninish Amirkhaniyan (Istipaniyan) were involved in charity. Anik was awarded a medallion by the Armenian Church of Beirut for her charity efforts. Close

This information was provided by the family. Close