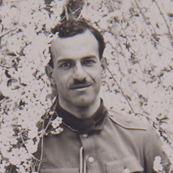 ‘Aliriza Vaziri, known as Shamshir [sword], was the son of Bibi Khanum Astarabadi and Musa Khan Vaziri. He graduated from the Swedish-managed Gendarmerie school and later worked for the forces of the Gendarmerie. He joined Colonel Muhammad Taqi Pisyan in the Khurasan uprising. After the uprising was defeated and Pisyan was killed, ‘Aliriza Vaziri was sentenced to death. Riza Khan stopped his execution with the mediation of ‘Aliriza's father. ‘Aliriza Vaziri married ‘Izzat al-Muluk and they had three children: Sayfi, Simin, and Pari. He died in 1943 or 1944.