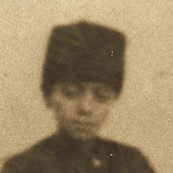 Mirza Muhammad Khan's one-year-old son, Ghulam ʻAli Khan, first caught the attention of the Shah during his father's visits to his sister, Zubaydah Khanum Amin Aqdas, the trusted and influential wife of Nasir al-Din Shah. As a child, he suffered from chronic trachoma and had an acute stammer. He became the substitute for the Shah’s favorite cat, Babri Khan, who had been put to death as a result of jealousy in the harem towards Amin Aqdas, the honorary keeper of Babri. The shah’s almost obsessive love for Ghulam ʻAli annoyed everyone at the court and in the government, and most of all his own children. A romantic side of ʻAziz al-Sultan and his love affair with the Shah’s other daughter, Taj al-Saltanah, appears in Taj al-Saltanah's memoirs. After Nasir al-Din Shah’s death, ʻAziz al-Sultan maintained connections with the court but lost most of his fortune. Close