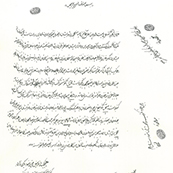 Dividing Mirza ‘Ali Khan's inheritance amongst his wives and daughters, 1915

Regarding the division of inheritance of the late Mirza ‘Ali Aqa among his inheritors, including Khvurshid Khanum (the first wife) and her daughters, Nuzhat Khanum (wife of Mirza Yusuf Khan) and Zarrin Taj Khanum (wife of Mirza Muhammad Khan); and Nargis Khanum (the second wife) and her daughter, Zibandah Khanum (wife of ‘Ali Bayg). According to the deceased’s will, two villages and five hundred tumans go to Khvurshid Khanum and her daughters, and Nargis Khanum and her daughter receive one and half villages in addition to two hundred and fifty tumans; one hundred and twenty tumans is bestowed to Dar al-Ihsan mosque to cover the deceased’s religious expenses; and Mirza ‘Ali Khan’s house, adjacent to Mirza Faraj Allah Vazir’s mosque, was equally divided between the two wives.