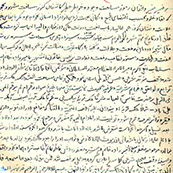 Copy of an endowment with the seal of the office of endowments in Zanjan; Narjis Khatun (known as Amirzadah Khanum), the daughter of Muzaffar al-Dawlah, has endowed the village of Almalu, the revenue from which is to be spent on ta‘ziyah, charity to the poor, and aid for pilgrims. Narjis Khatun herself will be the custodian while she is alive and will be succeeded by her male offspring, by female offspring in the absence of any male descendants, and, in the absence of any female offspring, by the most knowledgable of the learned men of Zanjan. Narjis Khatun has dedicated the merit of the deed to her father, her late mother, and her sister, Fatimah Khanum.