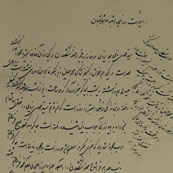 Report on the murder of Sayyid Mahdi Yazdi

“report on Wednesday, fourth of Shaʻban; a person named Sayyid Mahdi from Yazd had two houses and a garden in the Shishgilan neighborhood. In one of them he had accommodated his sister, and in the other one he lived with his apprentice, Muhammad Husayn from Usku. He had no wife and family. Last night, I was informed that at 2:30 in the morning, someone knocked on the door of a well known clergyman, saying, ‘I am the murderer, I have killed Sayyid Mahdi Yazdi, [please] let me in,’ but he was refused and left. I did not believe the story, so in the morning I sent someone to that person’s shop and it became clear that he had not opened his shop for the last two days. I sent someone to bring Nayib ʻAbd Allah, the Farrashbashi of the Shishgilan neighborhood along with Mirza ʻAli Khan. They saw that [the door of] Sayyid’s house was locked. Sayyid had one brother, so they summoned him, climbed a ladder, got into the house and saw that Sayyid’s head was cut and [he] had been wounded several times, lying in his bed. It became clear that there were two keys to Sayyid’s house, one kept by Sayyid and the other by Muhammad Husayn, who had locked the door after killing Sayyid and escaped. He is now in hiding. Let Usku’s governor know to arrest him if they find him in that area. We are also searching to find him here […]. Sayyid has a brother and a sister; he had sealed his shop. I sent someone to let merchants of Fars know and sealed his house and shop till his inheritors are found.” On the margin: “Brother, I read your report. This is an important case. Do your best to find Muhammad Husayn, the murderer. I wrote a telegram to the ruler of Dihkhavariqan, send it to him and watch so that the property and soul of the murdered does not get wasted.”