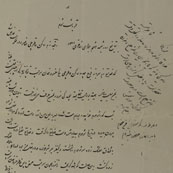 “Dated April 5, 1884; a petition from Ruqiyah, a resident of Qatirchi, against Khudaquli, a soldier of the new corps and a resident of Qatirchi (the property of Khusraw Khan, the brigadier of Royal Artillery); Ruqiyah Khanum claims that Khudaquli, who had recently revealed his feelings for her, came to her bed drunk, and took her out of her husband’s arms. Ruqiyah’s husband woke up and took Khudaquli’s hand, at which point Khudaquli hit him with a gun he was carrying, which resulted in breaking the husband’s head. Khudaquli killed Ruqiyah’s infant with the gun and escaped. Mirza ʻAli Khan, the brigadier, for the sake of Khusraw Khan, took Ruqiyah’s husband and kept threatening [them] not to send a petition to the government. Ruqiyah’s husband covertly let her know that Mirza ʻAlikhan’s people and ʻAli Aqa want to cover-up the injustice. The government’s agent went to Khudaquli’s house and arrested him. He is now in jail. Therefore, the claim is not baseless. Mirza ʻAli Khan the brigadier has sent his testimony to you. After punishing the perpetrator, the blood money of the murdered will be taken. This [letter] was written for your information.” On the margin: “[illegible], send [someone] to find Khudaquli and the husband, and investigate whether the truth is what this woman claims, or what Mirza ʻAli Khan the brigadier claims. Send me a report of the investigation. I will punish whoever is guilty personally.”