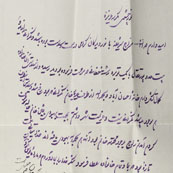 Two letters in an envelope

In the first letter, the writer reports that s/he received the 20 oranges that the addressee had sent and s/he thanks her/him, and talks about the well-being of some of family members. The writer greets Sultan Javad Khan at the end. In the second letter, the writer says that s/he has received the letter of the addressee and that Khanum is better now. S/he asks about the wellbeing of Nanah, and sends greetings to Samsam Nizam and others.