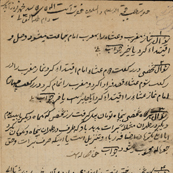 Questions for Sayyid Muhammad Yazdi Firuzabadi in Najaf, regarding the power of attorney to perform divorce; a father’s permission for marriage or temporary marriage of an adult virgin woman; the amount of mahr in case the husband dies before consummating marriage; alimony for an adult woman in a marriage with an underage boy or vice versa; the waiting period for woman in case of the death of her husband before consummation; marrying a sister-in-law after a wife’s death in case of the mother-in-law breastfeeding the man’s son; alimony in temporary marriage and during pregnancy after divorce; dividing the inheritance of a woman amongst her husband, maternal grandfather and half-brother; revocation of power of attorney in case of either party’s death; marriage after death or divorce of the husband; and the right to abstinence when the husband or wife has a contagious disease