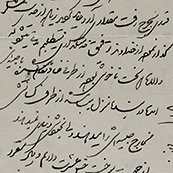 The writer, grateful for the wheat the addressee sent to them via Sadiq Lashkar, explains giving a portion to the writer’s father, selling another portion, and using the rest to make flour; discusses mother’s illness; says that the sister and her daughter have come to stay at the writer’s house, that her family is paying the daughter’s expenses but nothing for the sister; notes the difficulty to afford buying fuel; mentions Haji Musa, who was supposed to pay a monthly amount of two tumans, but only paid the first month and asks the addressee to talk to him, since that money could be used to provide fuel for the household; and inquires about ‘Ali Aqa’s health after falling down.