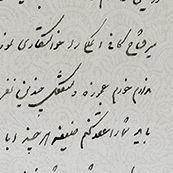 Ghulam-zadah Taqi writes to Hazrat ‘Illiyah ‘Aliyah sharing his concern about the wickedness of Mirza ‘Ali, the son of Mir ‘Abd al-‘Ali Kafi al-Mulki, toward the daughter of Mir Fattah Kafi al-Mulki. She rejected Mirza ‘Ali for marriage, stating that she is too old for marriage and has to raise her underaged children, but Mirza ‘Ali started harassing her by going to her house and on top of its roof. When she placed someone on guard in the yard, Mirza ‘Ali attempted to kill him; he also stole from the house, but returned the stolen items after the intervention of the elders and Mirza Abu Muhammad. Nevertheless, he went to the woman’s house at night and cut her daughters’ hair. This has caused a disruption for the people and the peasants, and they have abandoned the harvest. The writer asks Hazrat ‘Aliyah to immediately take measures to resolve this issue.