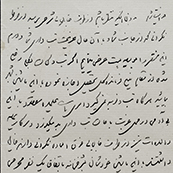 The writer is concerned about the addressee’s health since he had left while still ill, saying that he should take a leave to come home if he is still sick as there is no one there to take care of him – Sarkar ‘Aliyah was so concerned that she wanted to go to Sharafkhanah; urges him to write about himself and then shares some news, including the arrival of the malevolent Javad; the writer mentions his own illness, reports that they have asked Sayf Allah Khan to agree to the addressee’s leave and that they wanted to telephone him but could not because the wind caused the telephone pole to fall; also mentions revoking the house he had purchased by agreeing to pay the fifteen-tuman fee, but is relieved now.