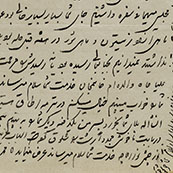 The writer [probably female] is concerned about the addressee, as she had not heard from him since he left for Tehran; she had prepared a telegram to send him, but then his letter arrived and she was overjoyed; she talks about the sufrah ceremony; has sent him some mahi azad [salmon], olives, and smoked fish; sends greetings on behalf of Hajiyah Khanum, Khanumjan (her mother), Nur al-Hajiyah, and the female servants; reports that she has been dreaming about the addressee for the last three nights; discusses the epidemic in Rasht; asks about the well-being of Aqa Muhammad Taqi; reports on the repairs to the bath and the need for money; mentions that she no longer needs velvet; clarifies that her suggestion to purchase the garden from the late Aqa Sayyid Riza’s wife was for the addressee and not for her, since she does not have the money for it; notes that she will stay with Hajiyah Khanum for Ramadan; observes that Haj Khayr Allah’s wife cannot breastfeed her first baby, despite having drunk the water of Iraq; expresses amazement that everyone who goes to Tehran feels the urge to have a servant or wet-nurse; and mentions that she will be sending the trunk key she had forgotten to send.