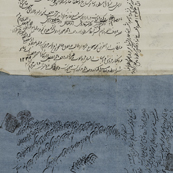 The first item includes four documents attached to each other: In the first one, dated June 15, 1832, Haj Muhammad, known as Haj Aqa Buzurg Sahib, the son of Fazl Allah Sultan, endows a house and five shops to Ta‘ziyah performers, assigns his children as the guardians, and names Mirza Abu Talib (who has since passed away) as the overseer. In the next three documents, dated January 2, 1829, Haji Muhammad, known as Haji Aqa Buzurg, endows a house located in the Masjid-i Naw neighborhood to Aqa ‘Abd al-Hasani; the contract was effected by Mirza ‘Ali Ardakani and Aqa Mirza Muhammad Sadiq, Mulla Muhammad Taqi Khurasani, Haji Mirza Abu Talib are among the witnesses.

In the second item, dated December 16, 1834, Haj Muhammad, the son of Fazl Allah, endows a house in the Masjid-i Jadid [Naw] neighborhood in Shiraz to the performers of Ta’ziyah for Imam Husayn. Haj Muhammad names himself guardian, and after his death, the guardianship will pass to his sons, Aqa Fazl Allah and Aqa Zayn al-‘Abidin, then to their male children, the male children’s offspring, and so on, and if the male children have no offspring, then it will pass to the sons of the female children, and so on. The duties of the guardian are described as: dividing the building’s revenue, minus the repair expenses, into five parts, of which the guardian is to receive one-fifth and the rest is to cover the cost of performing Ta’ziyah from the first to the thirteenth day of Muharram. Only the seminary students, Sadat [descendants of Muhammad the prophet], and the neighbors could be invited to these performances. If there was extra money left, they could extend the performances past the 13th and also invite the town elite and the merchants.