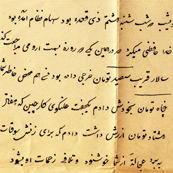 Letter to the beloved child

Letter [from Khadijah Sultan] addressed to her beloved child in which the writer talks about a letter she received, written by Salar, from Malayir; Saham Nizam’s saying goodbye before leaving for Urumiyah; the wellbeing of Mahmud; sending fifty tumans to the addressee; and giving money and a couple of bangles to Salar as souvenir for his wife.