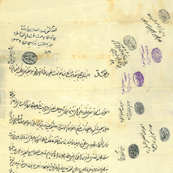 Settlement and Will of Bibi Zahra Khanum, 1914

Will of Bibi Zahra, dated February 13, 1914: Bibi Zahra Khanum, the daughter of Haji Ismaʻil, settled all her properties and belongings with Aqa Muhammad Karim, the son of Mirza Rahim, for 100 dinars. It was also settled that for fifty years from that date, if Bibi Zahra Khanum is alive, her living expenses should be paid, and upon her death, 40 tumans are to be spent upon: a memorial ceremony (costing 20 tumans), prayers and fasts, and to pay her debts and those of her late son, Aqa Muhammad Husayn. The rest should be divided among Bibi Khanum’s three daughters, Khvurshid Khanum, Ummah Khanum, and Sakinah Khanum. A note on the verso reads: “settlement with Aqa Muhammad Karim.”