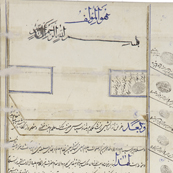 Marriage contract between Khvurshid Khanum, the daughter of Habib Allah, and Asad Allah, the son of Aqa Jaʻfar, dated December 18, 1876. The mahr includes 30 tumans, a qalamkar bed covering from Isfahan worth 4 tumans, room carpets including a rug and corner felt rugs worth 8 tumans, parts of lands and gardens, some properties in Vadasht, and one and a third walnut trees. On the verso: “after dividing the properties of Aqa Jaʻfar among his children, and calculating the shares of the bridegroom’s brothers, one acre from the four acre lands of Aqa Taqi was settled for [fifteen] qafiz of the lands in common, and five qafiz garden were settled for four qafiz of a garden known as Sayyid Muhammad’s garden, and another garden, which was purchased from Haj ʻAli with all its trees was settled for a walnut tree. The document contains some other property settlements, from which the share of the bridegroom, and consequently the bride, were allocated. 1877 (or 1878)”