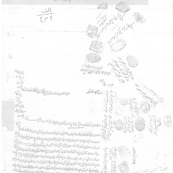 Endowment for a garden, known as Bagh Zangi, in Abarqu village, near Yazd, and three sixths of a house and its possessions, by Umm Salmah Khanum, the daughter of Haj Muhammad ʻAli Mirza Khan Yazdi. After the property was rented out, the caretaker was to spend three tumans buying bread and raisins for the poor on the Ghadir feast, another three tumans on giving bread, dates, and raisins to the poor during fast-breaking in the month of Ramadan. Five thousand dinars were set aside in case a stranger were to die without anyone to bury them or supply the shroud. The document also dictates that two tumans should be spent annually for Taʻziyah during the months of Muharram and Safar. It further calls for one tuman to be given annually to Shaykh ʻAli, the guardian of Aqa Shaykh Hasan, because he is disabled.