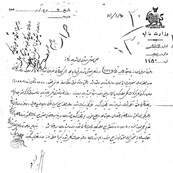 Documents include the following: letter from the Ministry of Finance to the Majlis, stating that Bahadur al-Saltanah’s salary was cut because of his theft from the customhouse of Saqqiz and requesting that the Prime Minister accept the request of Bahadur al-Saltanah’s wife and add her name to the list of stipendiaries if he accepts the request; letter from Bahadur al-Saltanah’s wife, in which she writes that due to her husband’s salary being cut off, she and her two sons, who are five and nine years old, are having financial difficulties because payments of stipend that they were supposed to receive up to 20 March 1922, stopped from the beginning of the [Persian] new year when it was decided that all stipends should be referred to Majlis for a review, which led her to worry that the payment may be stopped; a letter from the Majlis to the Ministry of Finance, informing them that the issue came up in the budget commission, and that a legal document should be prepared if the government recognizes the necessity of paying this family; a letter from the Majlis writes to the wife of Bahadur al-Saltanah, informing her that paying her 20 tumans of her husband’s wages depends on the the decision of the government because the Majlis confiscated his full 100 tuman salary, and they need to resolve this confiscation first; a note from Bahadur al-Saltanah’s wife compalining that the matter remains unresolved one month after the correspondence between the Ministry of Finance and the Majlis. A note on the document mentions that the issue arose in Majlis’ Commission of Budget and was accepted.