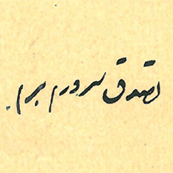 ‘Abd al-Husayn Mu‘azzaz al-Mulk (Taymurtash) writes to Surur al-Saltanah explaining why he did not have a chance to write earlier due to preoccupations at the Majlis and attending a party at the Ministry of Foreign Affairs held for the foreign ambassadors and their wives. He describes the party for Surur, noting that there were one hundred and fifty guests, men and women, with music, etc. He talks about the constraints on him and Surur al-Saltanah and that he does not believe in restrictions for lovers, whether in Muharram or Safar, and that he has written to Salar about this and is hoping they could see each other soon. He explains the reason for asking Surur about having eyeglasses was a dream he had in which Surur was wearing them. He then mentions Surur’s remarks about being happy that Mu‘azzaz was busy with work so he did not have a chance to do other things and explains that he only has Surur in his mind and, for instance, he did not pay any attention to some beautiful women at the table in the party. At the end, he tells Surur how much he misses her and tells Surur al-Saltanah that she could do whatever she wants regarding Shawkat al-Dawlah’s party.