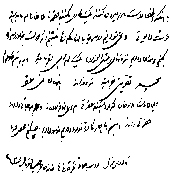 Petitions from wives of Na’ib Husayn Kashani: 1- a petition from Na’ib Husayn Kashani’s wife to Shukuh al-Mulk in which she talks about the hardships she and the other wives of Na’ib Husayn and their children facing. She mentions that when Mushir al-Dawlah was Prime Minister, it was decided that a stipend (6 qirans) would go to two of Na’ib Husayn’s incarcerated comrades in addition to a payment to his wives. After Mushir al-Dawlah’s resignation, these women went to Sipahdar Aʻzam, but remained helpless and therefore demand a stipend to save them from hunger. Na’ib Husayn’s wives clarify that they have no relation to the sons of Masha’ Allah Khan (Na’ib Husayn’s son) and that although his sons have received some kind of stipend, these women have not received any payments. They ask that the Prime Minister investigate this matter. Their address is written as: next to the Bath of the Furqanis, the house of Haji Husayn the tea house waiter. 2- a petition (dated 22 November, 1922) accompanied by an envelope from Na’ib Husayn Kashani’s wife to the Prime Minister, saying that it has been three years since all their property was confiscated, and although the Prime Minister ordered that a stipend be provided for Na’ib Husayn’s wives, this was not passed in the Majlis, so they have asked for a new order. 3- a note addressed to Mr. Dabirmakhsus, asking him to bring the writer’s suggestion to the attention of the Majlis. 4- Petition from Na’ib Husayn Kashani’s wives to Majlis representatives (24 May, 1923), complaining about their treatment, and how their property, including their Mahr, was taken from them. They say that this will force them to become beggars if they do not receive assistance from the representatives and ministers. This petition has been rewritten on the letterhead of the Majlis, by the head of its secretariat.