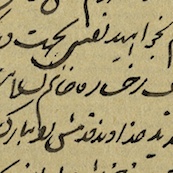 Letters to Jahan Ara (Hajiyah Khanum) Pizishkiyan, including the following: a letter on the news of the pregnancy of her daughter Rukhsarah Khanum; a letter from her husband, Mirza Buzurg Shaykh al-Islam, with the seal of Mushir al-Saltanah embossed on letter; a letter from the daughter of Qavam al-Dawlah requesting that Jahan Ara find her an unmarried female singer from Qavzin; a letter that may concern the preparation of the dowry of her granddauther Asiyah Khanum; and another letter from Qavzin in which the author writes to her about a family legal dispute.