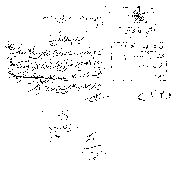 Petition of Sakinah Khanum to Majlis

Sakinah Khanum, the aunt of Muhammad Ismaʻil Bayg, the cook of the English embassy, was his only legal heir. She had a dispute over his heritage with his wife. She agreed to pay 80 tumans to Sakinah, but Sakinah felt betrayed and asked the Majlis to prevent her from usurping Ismaʻil’s belongings. The Majlis wrote that she had to go to the Ministry of Justice for her petition.