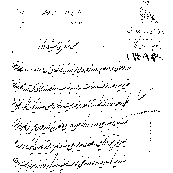 A report from the Ministry of Justice to the Majlis, concerning Mihr Mah Khanum’s petition against the beneficiaries of the deceased Hajj Mirza Fakhar. Displeased with the court’s verdict, Mihr Mah Khanum went to the court and insulted the members. Consequently, she was ordered to be jailed, but she was forgiven, but then took to spreading falsehoods. The second document is the Majlis’s response to her.