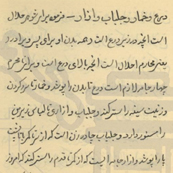 The first essay is Zaynab Baygum’s response to supporters of unveiling. It seems that this was first published in Istakhr periodical in 1926. At the beginning of the manuscript, there are some verses and poems about marriage and marriage contracts. Parts of this article are written in form of debate between a Naturalist (Tabiʻi) and Divinist (Ilahi) and between Isfahani and Mahjurah. After Zaynab Baygum’s piece, the scribe brings some poems from Iraj Mirza. The second essay is Sanad al-saʻadat. The author is Ghulamʻali, known as Azad al-Husayni and the scribe is Muhammad ʻAli Kamrah [?].This part is dated 1891. The third part is a collection of prayers by Muhammad ʻAli ibn ʻAli Akbar. It is dated 1933.