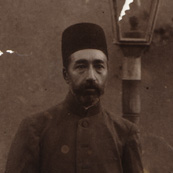 ‘Ali Khabir received the title of Khabir al-Saltanah from Ahmad Shah. Later, he chose Khabir Muhsini as his last name. He was a land owner from Natanz and married twice: first to Aqdas al-Muluk Mu‘izzi, and they had two children, Gawhar Shad and Fath Allah; his second wife was Gawhar Taj Javidan and they had seven children: Farangis, Manuchihr, Jamshid, Nahid, Puran, Azar, and Parviz.

This information was obtained through the family. Close