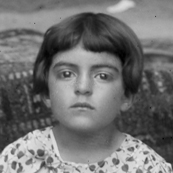 Faranak Salur, daughter of Nuzhat al-Muluk and ʻAbd Allah Mirza Salur, was born on 6 June 1928. Faranak and her twin sister, Naztab spent the first four years of their elementary education in Bagh Firdaws School, after which they attended the Tajrish all-girls school and received the 6th grade certificate there. Next, they attended the Nurbakhsh School and received their certificate in Home Economcis. They then both taught in elementary schools. Faranak left Iran in 1957 for Cologne, Germany and studied Textile Design. She returned to Iran after her graduation and worked as Textile Engineer until 1976 and then worked in the Internship Fund at the Ministry of Labor until she retired in 1981. Close

[This biography is based on information provided by family members.] Close