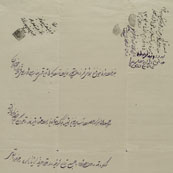 Mirza Muhammad Khan Vakili has settled his share of Gavahir village in Dihkhavariqan with his sister, Kawkab Khanum, for 700 tumans for one year, including the right of revocation. Also, at the end of the year, the whole benefit should be paid in exchange for eighty-four tumans. On margin: the seller’s share is two-ninths of four-sixths, which is confirmed by Mirza Muhammad Khan Vakili on November 29, 1923.